Since I had the semester free from classes, it didn't matter much to Southwestern that I was out of town a lot, and I do mean a lot. The previous post covers the time Phil and I were marooned on our mountain cabin in North Georgia.

Birthday Pics
We got off the mountain in time to celebrate Gwyneth's birthday in Pine Lake, GA before heading back to Texas with the cats. 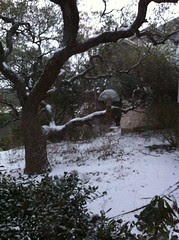 We even had snow in Texas -- it followed us, I guess. 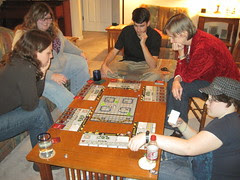 I had enough time at home to host the SU ACM club's annual belated Christmas party where we had a white elephant and played computer-like board games!

I attended an NSF sponsored meeting on the new funding for computing education and broadening participation in computing in New Orleans. My meeting overlapped my son-in-law's so it gave another excuse for me to be with Gwyneth and the girls who drove in to meet me. 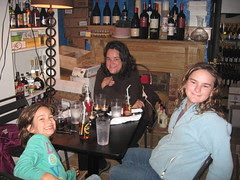 We had a great meal together in a little gem of a restaurant in the French Quarter -- the Green Goddess and I had an extra day in New Orleans with them because snow in Dallas caused my return flight to be canceled. 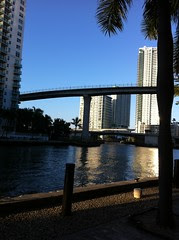 I was home long enough to wash my clothes and head to Miami for an ACM Education Council meeting. After the cold in Georgia and Texas, the balmy 80 degree Florida weather was fabulous! The meeting was good and I connected with friends from all over the world. I can't remember ever staying in Miami before and I enjoyed walking early in the morning along the waterways. 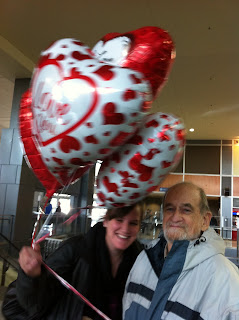 Susannah came home from California for a short visit and we greeted her at the airport with balloons!

Massachusetts Pics
For our next adventure, Phil and I went to Carver, Massachusetts, to help his sister with her annual brush burn. There was so much snow, we couldn't see much brush but we certainly saw and shoveled a lot of snow and ice! We did have some grand days to get out and enjoy the beauty of the Plymouth area. While we were there we showed solidarity with my friend from Christchurch New Zealand who survived the quake by wearing the NZ colors of black and red.
SIGCSE Pics
Back home for a couple of days before I drove first to Dallas for the annual SIGCSE meeting where I was surprised by an upgrade to a suite where I obviously had to through a little party. I added an interview with the winner of the outstanding computing educator award, Matthias Felleisen, to the Computing Educators Oral History project. I put up more pictures here than anyone wants to see unless you are looking for yourself in them!

Georgia Pics
From Dallas I drove straight through to our cabin in Blue Ridge, Georgia, to meet with a plumber about a leak we discovered just as we were going out the door for home in January. I had time for a quick overnight in Pine Lake to go with Gwyneth and the girls to see one of my favorite kindie performers, Ralph Covert of Ralph's World. Back to the cabin for a couple more days before heading back to Pine Lake and to home. 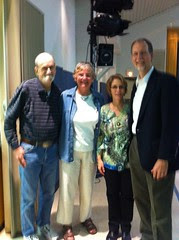 I actually stayed home for the rest of March but we had company beginning on Saturday after I returned on Friday. Our first visitors were missionary friends, the Herrins, whose daughter is attending Southwestern.

The next weekend was filled with family. Susannah and Luis came in from California and Gwyneth and Chloe came from Georgia to both celebrate my birthday and to take part in the Capitol 10,000 race. Luis says this is his 10th and the rest of us began running, walking or watching it in 1989 so it is definitely a family tradition.

Now that I have caught up with winter, spring travel will begin when Phil and I take off for New Zealand and Australia on the 16th of April!
Posted by Barbara Boucher Owens at 9:51 AM