We got up at 3am to go to the airport. The city streets were deserted. We actually saw only one car and two fire trucks all the way to the airport! We were certainly early. We had to go around a strange way after checking in effortlessly. We had coffee and then when we finally decided to go through security the lines for passport control were quite long. Turns out it was the first day the new Christchurch international terminal had been opened. Our plane was late taking off as a result. Once on the plane, Phil discovered that he had taken Alison’s street map with him by mistake. We ate the apples and chocolate eggs that were in our packs for breakfast.

It didn’t take us long to go through passport control, but the wait was both for our luggage and huge queues to go through the agriculture inspection. Joy and Barrie were waiting for us and it was a lovely day. Back at the house we unpacked and Barrie did a wah for us. We had salmon patties for lunch and then went to the National Wool Museum in Geelong to see the Jacquard look in action. It was broken when we got there, but “Michael” worked on it and after our tour with a particularly garrulous tour guide, we got to see it go. 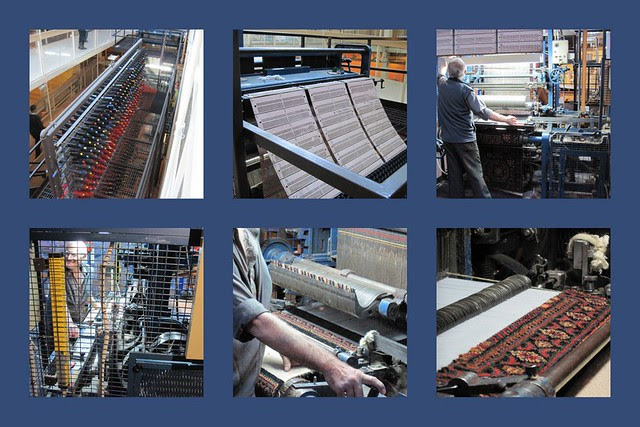 Back at the house, we had a short nap and showers before going to eat at Alfio’s Italian Restaurant with the “retirees”, a group of 10 that Joy and Barrie have been eating out and tasting wines with for the last 19 years or so. I ate far too much and couldn’t get through my main which I shouldn’t have ordered! 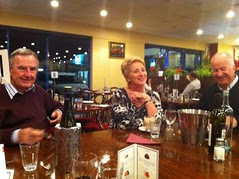 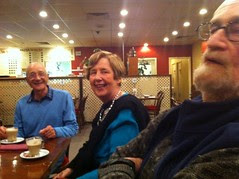 Phil discovered he had lost his pajama bottoms somewhere between Christchurch and Australia – possibly when he was required to go through everything in his pack at Christchurch or his whole suitcase in Melbourne! Barrie lent him a set of bottoms for the duration. Shades of my lending Barrie my shorts in Russia to wear as a bathing suit!
Posted by Barbara Boucher Owens at 5:19 PM