Up far too early to go to tour. At last minute I noticed that the url they had sent referred to the trip being Auckland to Rotorua and no return :-( However, when Tony let us out at the Intercity Bus terminal I noted that the receipt we had was correct and we would be dropped back in Auckland. Whew!

Out tour was on a huge shiny bus. While waiting, we met another tourist on the trip who was from Texas! The girl from GreatSights gave us each a rather yukky sweet roll – that was morning snack. The driver, named Layton was quite good.

We headed south through Hamilton to Rotorua. Tirau was a little town with incredible corrugated tin statues as advertising signs for businesses. The entrance to the Waitomo Gloworm caves was impressive and the caves alos. I learned more about the glowworms than before, I think. Upon exiting the cave the driver gave us our lunch in a brown paper bag! The drive to Rotorua was very pretty – again we went through Fitzgerald Glade. Our first stop in Rotorua was the Agridome where we went on a farm tour – to see an odd collection of animals which we could feed. 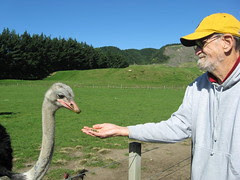 The dog rounding up the sheep wasn’t too good – but it was lots of fun to watch. The shearing was interesting and the carding demo a bust since the machine was broken. Then on to Te Puia for a Maori welcome ceremony – boisterous and good, 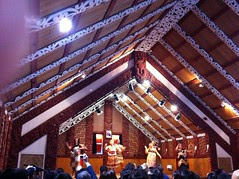 then a quick look at a kiwi in a kiwi house, and a short walk through the boiling mud pots and geyser area. 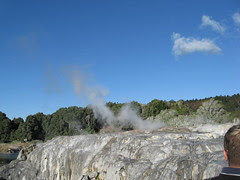 Back to the bus, another snack sandwich . We came back trough Matamata (Hobbiton). Tony met the coach and we got take away fish and chips and some wine to eat at home with Alison. 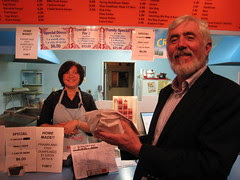 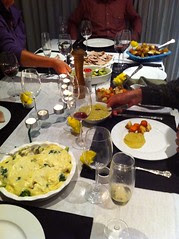