I slept terribly –so worried about waking up on time.  We left really early (before 6) in case the sequester made the TSA lines long.  Instead what happened was we sat in traffic for 45 minutes on 71 because of an accident.  Only a few lucky breaks got us to the plane on time. The lady driver at Fast Park ask the dispatcher to let us go because we were late due to the wreck, and there was absolutely no line at TSA.  Our group was being called as we got to the gate.  Whew!  I worked on Henry’s interview on the flight until my battery got too low.


We got into SFO early and had little trouble finding the shuttle.  Boy was that easy!  Our plane landed about 9:40 an we were at Suze’s by 10:45.  Gwyneth and the kids were off on a walk to met their friend. She had left us keys and texted me with pictures of the hiding place.  Phil and I had breakfast and then set off walking.  It was absolutely gorgeous out – and the coastal trail was packed.  We ran into the family near the Legion of Honor.  Back home Gwyneth and I went to Fresh and Easy with Chloe to get stuff for lunch.  I called the dentist for mouth wash and they arranged to get my prescription to CVS. After lunch of risotto and mac and cheese, I took Chloe to the playground and then to CVS.  Then we walked to Ocean Beach and hung out.  Afterwards it was back to the playground with both girls and to the store for more food – tortellini, salad and watermelon..  Gwyneth had the kids and me go up on the roof to take late afternoon shots of the city.  I made supper and Luis and Suze came home.  Lots of video games and I was exhausted.  Suze had bought a new blowup bed at Target so there were plenty of places to sleep.  I was very cranky at bedtime but slept incredibly well.

Wednesday April 10 SF
I got up early as did Gwyneth.  I made coffee and then she convinced me to go on the roof with her to see the effect of sunrise on the view – it was spectacular!


After Suze and Luis went to work and we took off for Lincoln Park to find a geocache.  We found it after a lot of looking.  Then we walked up to the Legion of Honor Museum  and walked down to the Lincoln Park Playground so the kids could show Gwyneth.

We had a bit of lunch – hotdogs and leftovers and took the bus to Fisherman’s Wharf.  The girls got ice cream at Ben and Jerry’s.  We walked to Pier 39 to see the sea lions and a gull swooped down and stole Chloe’s ice cream!


We walked further to the Alcatraz Cruise place and after getting our tickets, had yet another snack.  It was an absolutely gorgeous day for a boat ride.  There was a lot of walking and it was all interesting.  We took the audio tour inside the prison and watched some videos about the Native American occupation in 1969.  We had an awful time getting a trolley to a bus – when we did get onto the tram it was more squished than I had ever been.


We caught a bus back to Outer Richmond, and ordered food from Pagan, a Thai-Burmese Restaurant around the corner.

A day without a real plan.  We went to the neighborhood playground and watched what was surely  nursery school field tip of three and four year olds holding hands and singing kids’ songs like  Twinkle, Twinkle – they were mostly Asian and adorable!  After Chloe was nearly played out there  we walked up hill forever to an overlook of the Sutro Baths and then we walked down to the visitors center.  It was sunny, windy and cold,  We went to the gift shop at Cliff House and then walked along Ocean Beach watching dog walkers handle up to 9 dogs each off leash!  We stopped for lunch at the Beach Chalet.  Gwyneth treated us for my birthday.  It was really good.  I had a meatloaf sandwich but didn’t like it, so Phil ate it and I ate his veggie burger.  He had a Riptide Ale – appropriate for the locale.  We had yummy sweet potato fries.  We walked back through Golden Gate Park, finding a geocache and watching the bison that were funded by Marissa Mayer.


Back home we rested until it was time for me to take Chloe to see Suze play her first kickball game in Golden Gate Park with the Arup Ninjas.  It was a very lopsided game – Arup lost.  I had driven Suze’s car over and she drove back. We tried to find the extra special kids playground but never really saw how to get there and park.  Phil had spent a lot of time trying to fix the cats’ auto food dispenser.

Gwyneth had bought a bunch of hors d'oeuvres for supper and we snacked before bed.  I never saw Luis because he had gone to Oakland to an ASHRAE meeting  and got back late.

Suze and Luis took off early to walk the 5+ miles to work on Walk to Work Day.

We took our time getting ready to go – took the bus to the Haight  Street corner of Golden Gate Park.  We walked to the Koret Children’s Quarter – the oldest playground in the US.  Chloe loved the climbing structure.

Even Camille gave it a try.  The concrete slide wasn’t so big a hit, though. We were disappointed that the operator chose just the moment we approached to close the carousel for his lunch break.

We walked on through the lovely AIDS Memorial Grove to  the Academy of Sciences where Gwyneth and Chloe went in and to the deYoung Museum where Phil, Camille and Barb had lunch, toured the Girl with the Pearl Earring exhibit and then briefly looked at wonderful things in the permanent exhibit.  Because of the special exhibit which included a lot of Rembrandt era etchings (some tronies), the entire featured menu food items were Dutch.  Phil loved the pot pie!

A docent insisted that we go to the  Hamon Tower for a view before we left and it was special.


We rested at Suze’s until she got home and she took the Buteras to their hotel.  We picked up Luis near Arup and headed back to Outer Richmond.  She left me off at the grocery and I got food for dinner.  I made Ritz Chicken, mashed potatoes, and broccoli.  Although it was a VERY late dinner it was really good if I do say so myself!

Phil and I went to the Farmers Market at the Ferry Building.  We watched a cooking demonstration on veggie paella and wandered around the stalls.  We shared an open faced veggie sandwich and an odd Aztec tea.

Gwyneth had taken Camille to Japantown to meet up with a friend and then G and Chloe joined us at the Farmer’s Market,  We walked back to G's hotel, stopping at a toy store.  Luis and Suze joined us there. We hung out at the hotel for a while and then off to Moscone Center (Luis and I found a geocache inside the California Historical Center) and then grabbed snacks.  Chloe, Suze and I rode the carousel and Chloe played in the playground. 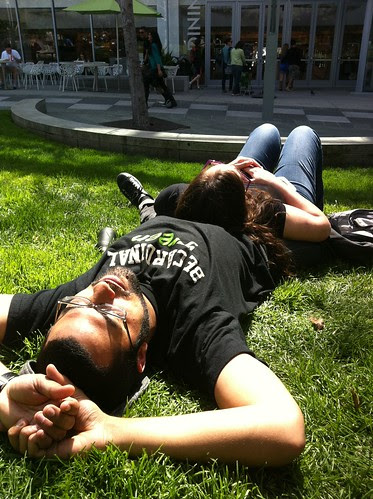 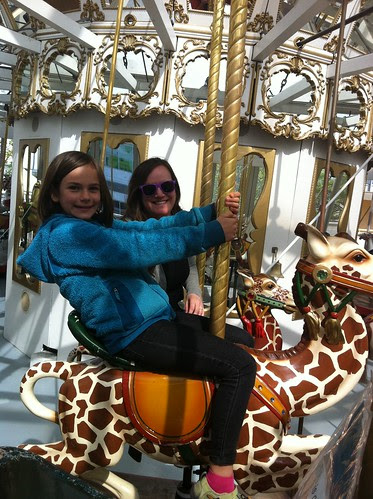 Hanging out in Yerba Buena Park

We took two buses to Coit Tower – cool ride through Chinatown and then North Beach (Little Italy).  The bus took us right to the top and we walked down, seeing the Parrots of Telegraph Hill flitting about and squawking. 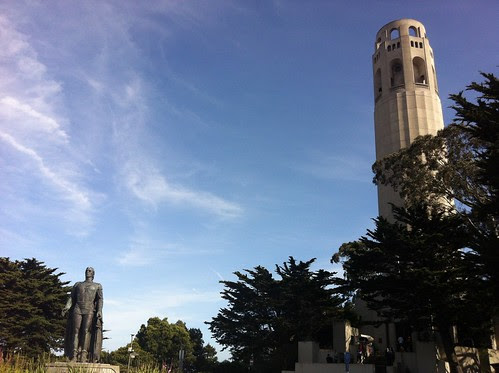 Back at the hotel we watched TV and Camille wanted to go to a shop which turned out to have closed early.

We left the Buteras and took a cab back to Outer Richmond where I got stuff for a pizza supper before Suze and Luis lef for a late party.

The four of us took the bus in to the Ferry Building to meet up with G and the girls.  We all ate a bit from different venues and walked the Buteras back to their hotel, stopping to look at a funky dress shop, Harajuku Hearts,  with Camille.

After our goodbyes, we headed to the Mission District to a Street Sunday event – walking up and down Valencia St.  Phil and I peeled off and geocached.
Luis headed home and Suze, Phil and I walked to Mission Dolores Park and further up to Mission San Francisco de Asis.  We were convinced to wait outside for a woman, Edie Littlefield-Sundby, walking the missions in honor of her surviving cancer.  The mission and its associated basilica were fascinating.  We headed back to Outer Richmond.

We ordered Mediterranean food and  had it delivered.  We ate while watching an old movie – The House on Telegraph Hill.

Phil and I hung out and caught up with diary, newspaper, etc.  The weather was cold and forecast to be really windy and sunny.  Phil wanted to walk anyway so we headed for the Botanical Garden in Golden Gate Park.  We found a geocache near the Prayer-book Cross.

We then went to Stow Lake and decided to walk to the top of Strawberry Hill.  The park is so beautiful.

We ate lunch at the boathouse and made our way to the Gardens. The woman at the kiosk told us to concentrate o\n the California section because it was most in bloom. 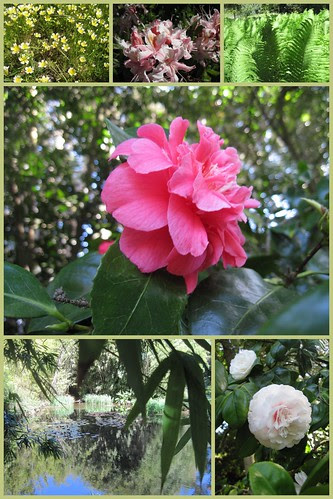 When we got back we heard about the terrible bombing at the end of the Boston Marathon.

We took the bus back and we got steak and potatoes for supper.  Afterwards we watched a movie with Suze and Luis – Smoke Signals.

Suze began the wash before going to work.  Luis had left very early to go to physical therapy.  Phil and I packed and waited for Barbara S. to come visit.  She got stuck on the Oakland Bay Bridge but made it only 45 minutes late.
We walked to Eagles Nest overview and then along Camino Del Mar in Sea Cliff to China Beach.  We stopped at Fresh and Easy for some supplies for lunch and back at the apartment had steak sandwiches.
The Super Shuttle came for  us at the same time Barbara was leaving.  We had a very interesting ride to the airport – to University of San Francisco and Bernal Heights.

The flight was uneventful but when we got to the parking lot, my front tire was flat.  It took over an hour for AAA to get there to change it.  Alas, we were really tired when we got home!

Posted by Barbara Boucher Owens at 8:24 AM No comments: