I was up early for the conference but Gwyneth got both girls up as well so they could get ready to go to Euro Disney which opens at 10 am. I got to my conference at about 8 after returning to the apartment about three times -- forgot my whatever including the umbrella since it was raining when I got outside.

The conference opening was in a room ill prepared for it being bright outside. The keynote was about a new take on Bloom's taxonomy and how the speaker used his own version of syllabus analysis to "prove" that computer science was at a higher level of cognitive processing than natural sciences and huge about higher than math. Hmmm.

Eric Roberts decided he wanted his interview now, so he came to the apartment and I interviewed him. I managed to record 2 hours and 20 minutes! An additional benefit of Eric's coming was that between us we figure out the trick to opening the three-way window in either direction.

Then we went to his hotel and got his wife Lauren to come along for lunch. We found a little Egyptian restaurant where we got falafel, a bean dish, hummus and tahini with salad and pita. It was quite good. We were the only customers in a restaurant complete with hookas. 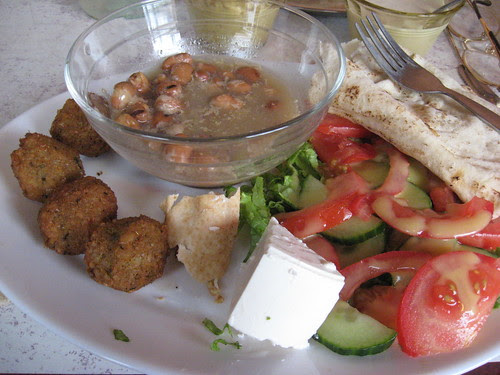 Back to the conference for the last speakers of the day. I hurried out through the Jardin des Plantes to the store to get necessary supplies and dropped them off at the apartment before returning for the buffet reception of cold cuts and veggies. I left as the cheese course came out.
Posted by Barbara Boucher Owens at 12:27 PM