Up early to get shuttle to airport. Phil tipped the wrong guy! Then we struggled to get the driver to understand where we needed to be dropped. But eventually we made it to the Fed Air shuttle. The waiting room for the ariline was about 5 kilometers away from the main Johannesburg terminal. It was more like the Ambassador's club, with lovely food and drink for free. We had a very long wait for our flight to be called. There is no security. The only thing that happens is that they weigh your bags. Our plane was a one engine Cessna Caravan I that holds 15 max. It was the pilot, co-pilot, one young guy, six girls, Phil and me. The flight to Madikwe was about an hour. The "airport" is just a dirt road in the middle of nowhere. Not a building in sight. The lodge operators send a jeep and rangers to meet you. Our driver was Beck, short for Beckson. 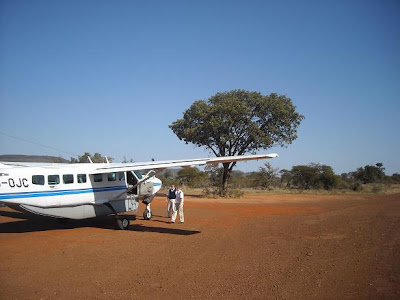 Immediately we saw three lions. This was quickly followed by 2 giraffe with a bunch of zebra. We got to Impodimo after about an 45 minutes journey. It is quite pretty. But our room is very far from the lodge and my foot was very tired. I was hungry and they brought us a small fruit basket and we had some of the wine -- a half bottle cost $12! This is a soak the rich kind of place. 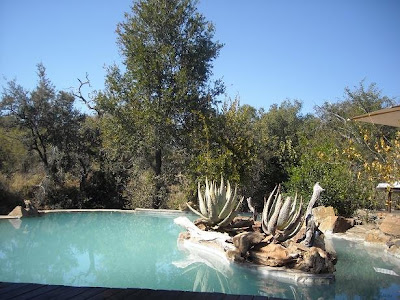 We met for tea at 3 and were soon off on the evening ride. We were gone about 3 hours. I was most impressed by the close up rhinos, a ton of Cape Buffalo and a spotted eagle owl who posed an dkept turning his head nearly all the way round. The terrain here looks almost identical to the Texas Hill Country, If you plopped me down that is where I would say it was. 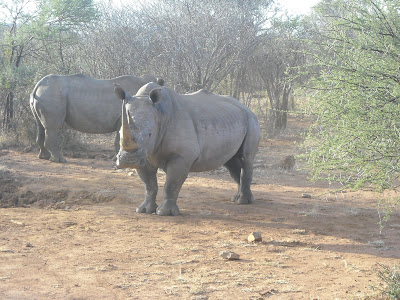