Scotland June 25, 2007 -- to Edinburgh and then Guthrie Castle Reception 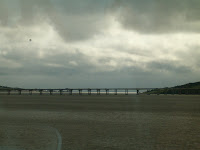 Since the web showed that my suitcase was ready for delivery and I had heard nothing and could get no one to answer a phone at British Airways, I decided to take a cab, to the train to Edinburgh where I could see the city a little and then go to the airport. 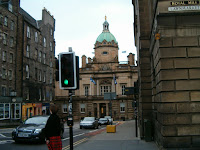 When I got to Edinburgh I went up from the station to the "Royal Mile" and say lots of signs for the Military Tattoo. I couldn't figure out why tattoos were so cool in Scotland but soon learned that it was a big show soldiers who marched in costume in the summer in front of the castle. I went into the Tattoo shop where there were tons of crafts for sale and several looms actually in operation making tartans. 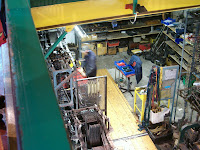 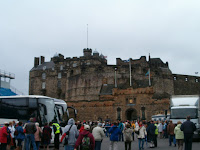 I was lucky at the airport. Although the airlines thought my suitcase was still at Gatwick, the guy at the desk decided to ask the delivery people who checked. It was in the warehouse because it was not labeled right and I never would have received it!

So I did the bus-train-cab thing and got back to Dundee in time to go to a great banquet at , but missed the entire day of sessions. I sat next to John Hamer and thoroughly enjoyed all our connections – from Gwyneth’s colleague Kathleen to engineering physics data structures at Polacksbacken. A bagpiper greeted us as we got off the bus.

I spent a lot of time in the beautiful gardens so missed seeing the inside. 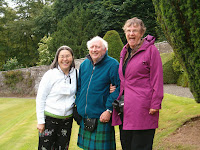 The banquet included a very elaborate poem and ceremony saluting the haggis. I got a great shot of Eric Roberts applauding the haggis -- quite a 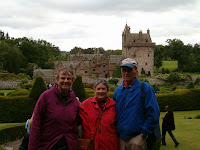 surprise for a confirmed vegetarian! 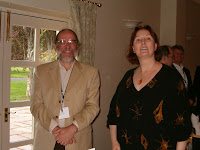 I even dragged Henry out on the dance floor to do a Scottish dance. We were both awful!

Our bus broke down on the way back and we had to wait for a replacement. It was after midnight when we got back.