Camille had helped me pick out buttons to put on the sweater I decided to take. Chloe spilled the whole button jar in the dining room.

Gwyneth took me to the airport and I got there quite early, so I got an earlier flight to Dallas. Then I flew standby from Dalls and ended up in a middle seat between two AA maintenance crew managers from England. The plane was quite delayed, first due to rain and a leaky jet bridge, then lightning and finally due to the fact that some guy didn't make it to the plane but his luggage did. They had to go through all the luggage in the cargo to find and take it off. At least they didn't charge for the wine as a consolation. 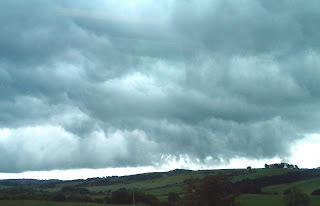 I had to exit security and check my carry on roller board bag since they only allow one carry one in the UK. When I got to Edinburgh, my roller board didn't. Henry was there waiting for the conference bus and thus all the people had to wait for me to fill out forms, etc. The ride to Dundee was spectacular. We crossed the Firth of Forth had a great view of the railroad bridge which was built in the 1800's. The countryside between the Edinburgh airport and Dundee was lovely.

The hotel was a college conference center. My room was not spectacular, 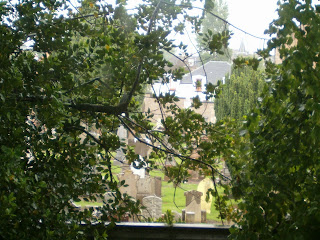 but had a nice view of the cemetery next door and had everything I needed except internet access. 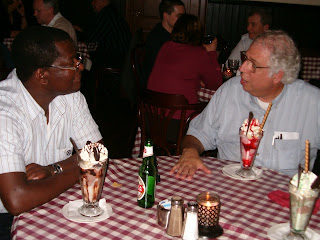 I met Henry for dinner -- we tried to catch up with Harriet at the Hilton but were unsuccessful--and a young man from Ghana named Eric who is studying to retrain from math to CS in England joined us for supper at an Italian restaurant that had Mexican food, and haggis stuffed chicken that I ordered. We even had ice cream sundaes for dessert. Harriet actually was there, too, and we talked to her at the end of the meal. We took a cab back to West Park.