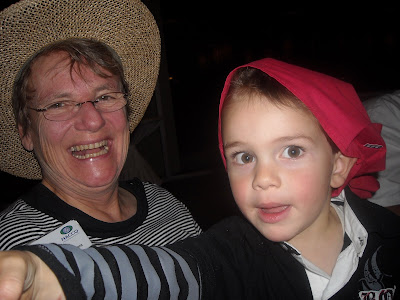 I did not have a July 5 as I was in transit to NZ. I flew business class which was nice. QANTAS gave out pj's.

The plane was a little late and immigration took over an hour. It was raining when I got a cab to the hotel and they let me check in early. Immediately went to breakfast with Alison and Tony and then the conference. Interesting stuff on SFIA and certification.

I took a nap in the afternoon after a huge luncheon. Then I went out to look for something for a sea theme costume. I wasn't successful but when I got back to the room I realized that my red pillow case would work!

The banquet was wild, and I won a prize for the best dancing!!! Me????
Posted by Barbara Boucher Owens at 2:42 PM