The plane from Chicago was two hours late landing, so I barely had time to get to my next plane to Istanbul. It took a while to go through security. And then it was way past time to board. I couldn't find a departures board until I went downstairs. Then I say that plane was delayed. I checked my email and then ran into Kate Sanders and Robert McCartney who were headed to Stockholm. We had a good conversation about SIGCSE. When I finally boarded my plane, it was more than an hour late. I sat right behind Monica Gill and Michael Kolling! Michael helped me with my bag at both ends of the trip which was lovely. I ate the lamb casserole and lunch and then slept the whole way.


Immigration was very frustrating. Monica and I needed visas, and didn’t know we had to go get them in a separate line until we had waited 15 minutes in the passport line. Getting the visa was just paying $20 and a person pasted the stamp in my passport. They didn’t even enter any info from my passport so the transaction probably took less than 5 seconds. Once again we had to stand in the long passport line. 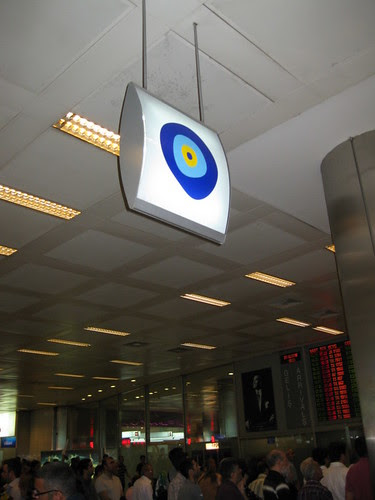 Gwyneth, through a series of text message exchanges, convinced me to take the Metro to the tram to the ferry. Everything worked fine. I was able to get money from the ATM, and an attendant helped me get my tokens for the Metro and tram. My only confusion was in getting the correct train when I got off the Metro. But it was fun to ride the tram and see the sites of Istanbul. The train went right past Topkapi and the Blue Mosque. I crossed the bridge on the Golden Horn and got off immediately spying Phil’s robin’s egg blue shirt. I was very happy! Gwyneth had come with him and took my bag to where Rob and the girls were waiting. We just missed the ferry to Haydarpa which was a good thing because we were confused about the tokens for the ferry because they were different from the ones for the metro.
The girls wanted the top level on the ferry to the train station where the view looking back at the Europe side was super. I got my Bosporus cruise! 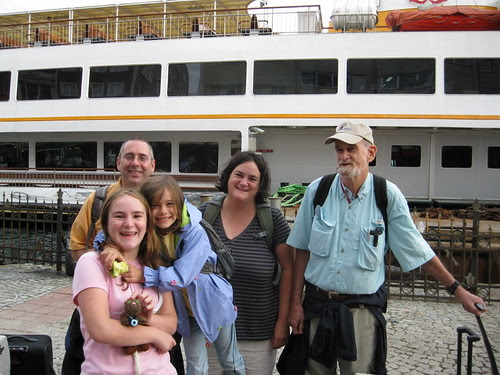 We ate dinner at the railroad station. The waiter was super nice and we chose a whole bunch of mezes (appetizers). Phil and Rob each had a grill main dish – Rob hat kofta (meatballs) and Phil had kebobs (lamb) but they both got lightly grilled tomatoes, onions and hot green peppers plus macaroni and French fries! Rob tried raki and Phil tasted his. 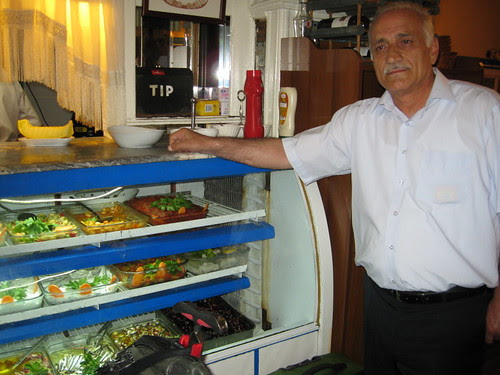 We found out sleeping car rooms without a hitch> The girls loved the bunks.
Posted by Barbara Boucher Owens at 10:00 PM