I met up with several folks from the ICER conference at breakfast. Some decided to take a bus and I went with the walkers. The university was a little over a mile and a half away (much up hill) but we arrived in plenty of time. Registration yielded yet another backpack – very nice one. All the talks were really good as were the discussions. Lunch was a smorgasbord of typical Danish food and the coffee breaks had super pastries.
The excellent keynote by Moti Ben-Ari was later blogged by Mark Guzdial.

Sue Fitzgerald went with me after the meetings finished to try to find the Women in Science geocache on the Aarhus University campus (we had had no luck with a micro near the venue). I quite easily found the cache whose coordinates were a puzzle about mostly Danish women in science. I had forgotten to bring the travel bug, so it meant another trip for the next day. 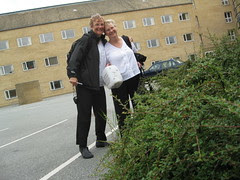 I walked Sue back to her hotel (A Best Western called the Ritz) and met her roommate, Beth. Then Sue and I walked to my hotel and we were escorted by Michael Casperson’s daughter Christina and her boyfriend to the restaurant for the banquet. Again it was excellent food with a very entertaining owner. 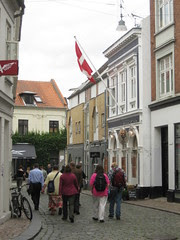 I sat between Colleen Lewis and Leigh Ann Sudol acting as a buffer between Leigh Ann’s definition of a misconception and Colleen’s. Also talked with Orni Meerbaum-Salant, from the Technicon in Israel and her husband. Back to the hotel where I had an email from ACM about the SGB meeting in New York for which I had booked tickets to Chicago. Yuk!