Phil and I walked to town to find the larger grocery store (Tansas). We learned that the citadel overlooking the town has been closed for 5 years. Our first stop was the Kiwi Carpet Shop where we met Alison’s ex-husband and arranged for a driver to take us up to the Ephesus site later in the day when the tour busses would be gone. We wandered into a few gift shops looking for birthday gifts for Chloe. A particularly aggressive shoe shiner managed to polish one of my sandals before I escaped, looking slightly askew with one shiny sandal and one very dusty one! We did find the store eventually and bought a whole lot of heavy stuff, trudging back to the villa in the heat.

All of us except Chloe and Susannah walked to St. John’s Church. As soon as
Phil started taking pictures, he realized I had left his SD card in my computer so I hurried back to the house to retrieve it. Good thing we were only a few blocks away. In fact we were just across the street from the villa when we took some of the pictures, only we were about 50 feet above it and separated by the enclosing wall! 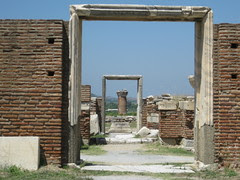 Suze bought Chloe a coin decorated skirt she wanted for her birthday (but Phil and I had bought the same thing earlier)! Oh, well, she can play with a friend.

When we all walked down to town (except Rob who brought the car), Mustafa showed Chloe carpets and served her “apple tea.” Another young man drove us and our van to the south entrance and left us off. We then toured the site which was so empty that I sang happy birthday to Chloe when she was in the small amphitheater and I was on the stage. There was no one else but us in it at the time! The ruins were definitely amazing – to think Paul had walked the same streets! 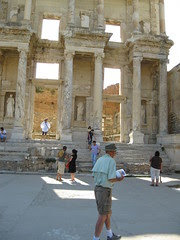 Our walk back to the villa was long – a little over two miles and the little girls did a great job of not complaining. The path followed an aqueduct so it was nicely shaded. We stopped at the Temple of Artemis where we were pestered by a little girl who wanted to sell us fake coins.

Back home I made pasta for supper which was a big hit.
See more photos.
Posted by Barbara Boucher Owens at 11:14 PM