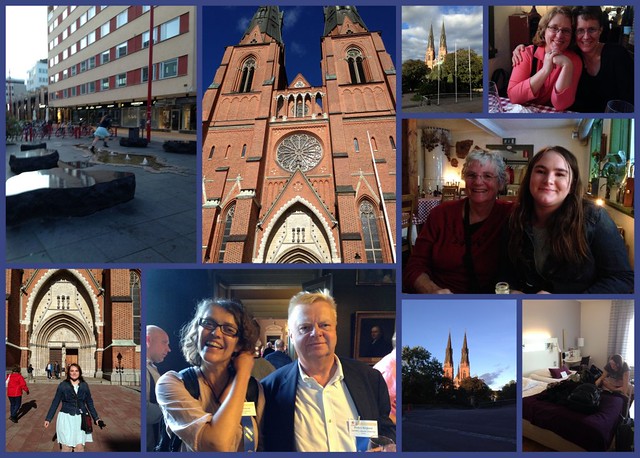 Photos from Uppsala are in an album on Flickr - https://flic.kr/s/aHsjZbQ1Vg

On the train from Stockholm to Uppsala,  I recognized a SIGCSE friend and we talked.  As we exited the train in Uppsala it began to rain again.  We found the hotel easily and got settled in just in time for the reception. On the way, we peeked into the DomKyrkan. The Universitet Huset was gorgeous and the talk about it very interesting.  No food, except pretzels but both alcoholic and non-alcoholic wine.  Lots of good conversation and Camille really enjoyed the building.  We went out to eat with Amber Settle and Yvon Feaster to a close by Italian restaurant, Il Forino where Camille had ravioli and I had risotto.  Back to the hotel where I prepared for the meeting.  It was after midnight when I went to sleep.n 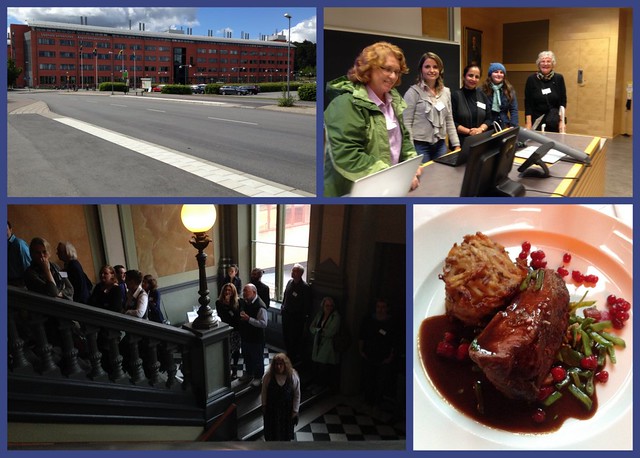 I got up at 6:30 to have breakfast with Boots.  We took the bus to Polacksbacken.  There were four of us trying our credit cards.  At first the bus driver couldn’t do it, but finally it was ok and we got to the conference just in time.  The keynote was interesting on new devices and techniques for student centered learning.  At the coffee break I took the bus back to get Camille.  She slept too late for the 10:30 closing of breakfast.  We went to the newspaper shop and bought bus cards.  I think the driver entered on mine that I was a child, but I am not sure.  We did get to the meeting and looked for a geocache, again unsuccessfully and because it was very cold, windy and rainy, we gave up.  Lunch of scalloped potatoes, yummy veggies and pork was quite good.  I spent much to the meeting talking with Shuchi Glover who just finished her PhD at Stanford.  She was then one of the presenters in the group I chaired after lunch, along with two women from Argentina and Yvon with whom we had eaten dinner the night before.  The coffee break had yummy sweet pastries that both Camille and I enjoyed.  We were late for the last session because the room was wrong in the part of the program I was looking at .  What we did hear was good – a young woman from Toronto gave an excellent history of women in computing, and two other speakers were interesting as well.  We left during the question period to get the bus since they only run every 20 minutes
I was going to change for the banquet but because of the rain, I just wanted to keep warm.  We huddled under the umbrella and got to Norrlands Nation at exactly 7 and we were among the last to arrive.  An a capella group from the Nations members sang to us as we sipped sparkling wine on the staircase.  The room where the banquet was held was huge and we got seats which looked out the window at the houses on the other side of the river and whose roofs were covered with tons of birds. Service was slow but conversation was good.  We had a fish roe appetizer and the main dish was venison with lingonberries.  During the evening we sang many songs and raised out glasses. (we had been supplied with song sheets).
Dessert was ice cream with some sort of sauce.

The banquet ended about 11. 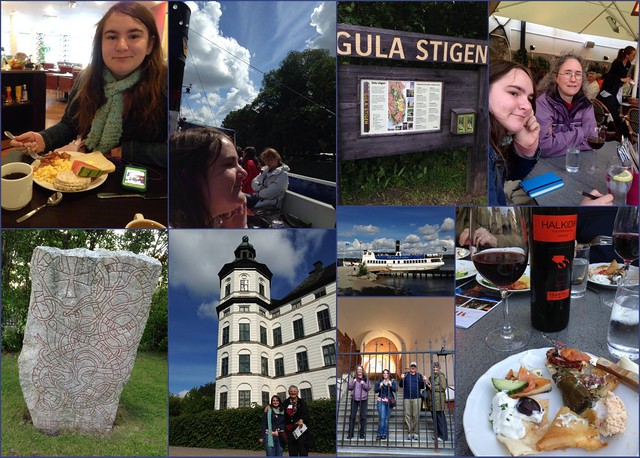 I had breakfast with Boots and then Camille joined us.  Camille walked with me as far as the boat we would be taking later in the day so she would know how to get there and meet us for the trip to the castle. I walked to the conference first through the waterside garden and then up onto the forest path.  It was beautiful. I got there just in time for Boots’ session on the history and future of ITiCSE.   I picker up a sack lunch for Camille and one for me and joined the group walk back toward town and the boat. I had a king talk with Virginia Grande who is chairing the next ACM-W Europe conference in Uppsala.  Camille was waiting when we got there. The boat ride was sunny thank goodness and Mikey Goldweber and I solved lots of SIGCAS problems and then Susan Rodger, Mikey and I talked about iSIGCSE and other stuff.  Then they pretended to throw me overboard for twisting their arms – Susan to be SIGCSE chair and Mikey to be SIGCAS chair.  It took two hours to get to the Skokloster Castle by going down the Fyris River and a long time on Lake Malaren where the castle is. Out tour guide was very good but we only had an hour to see the castle because we had the two hour ride back!

Camille and I went geocaching just as we left the boat and found the one there on the bridge.  We went with Susan Rodger and Boots and Bill Cassel, finding another one by the cathedral before going to Tzatziki, a Greek restaurant on the river. It was really cold, but the restaurant had blankets for us to wear We had a large variety of mezes that were super. It was quite late when we got back to the hotel and then even later when we got to sleep. 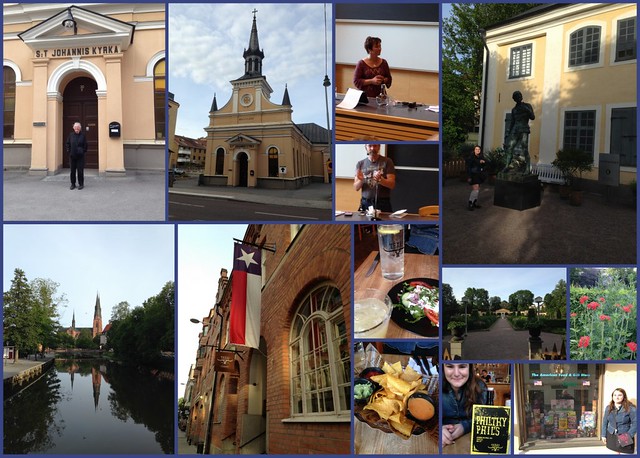 Once again I had breakfast with Boots. Camille slept in.  Boots and I walked through the forest to the conference, arriving just in time for the keynote, Åsa’s PhD advisor, Jan Guilleksen’s talk on becoming digital.  It was quite interesting.  He had Simon face the audience so he couldn`t see Jan and Jan had Simon give him directions to put on a jacket. It was funny. I texted Camille to get up which she did, five texts later J. I started to go back to get her at the break but she texted me that she was going to take the bus.  I worked on preparing to interview Elizabeth Patitas from U of Toronto and finished getting stuff around the time Camille was arriving on the bus.  I was glad to see her and she was very proud to have taken it successfully!  We had salmon for lunch.  She and I took the bus back so I could get my equipment for the interview.  I stopped at an apokotet for some cranberry pills. I was able to return on the same ticket as going because it was within 75 minutes.  I interviewed Elizabeth and finished with enough time to transfer my files before the wrap up.

I took the bus back with Boots.  The guy sitting in front of us 1) fell off his seat while texting and 2) overheard us talk about geocaching and volunteered where there were some! Camille was there to greet me.  After regrouping in the room, we went for a walk.  Turns out the church I went to when I was living here is right behind our hotel and is no longer a church, but a high tech company.  How sad.  Camille and I then walked to Linnaeus Garden which is open on Tuesday nights for free. We then found a geocache and walked around a bit before going to eat at the Texas Longhorn Restaurant.  When we paid the bill I had to use show ID to use the credit card and the waiter (who spoke little to no English) almost fell over with joy to notice it was a Texas driver’s license! Back at the hotel we turned on the TV a minute to say we watched Swedish TV and then I worked on this blog.  A key has fallen off my tablet keyboard and I have no idea when nor where and I truly don`t even know what that key did! 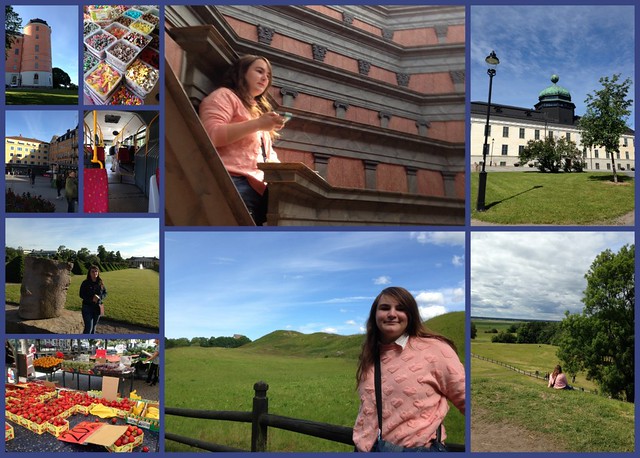 I actually slept until 8:30.  We had breakfast and then headed out first to the Godis store for gift candy.  Then we walked to the Gustavium (the Uppsala University museum) which was really well done. We saw grave boats of the Vikings, Rudbeck’s anatomy amphitheater from 1660’s.  The Augsburg Cabinet for a portable art collection was amazing.

We then bought our bus tickets for the day’s travels and for the airport bus.  We rode out to Gamma Uppsala.  We climbed the mounds (a man helped me up and I sat on my bottom down). We looked for a geocache in the old church and heard a pianist play there.  The Celsius family is buried inside.  We went to the Odinsburg café for a snack and then to the museum gift shop after another exploratory walk.  It was a lovely day. We got off the bus ealy when I spied a market with fresh fruits and veggies and we got strawberries that were as good as they looked!   \Once back at the hotel we regrouped , packed and headed out to the castle, finding a geocache by a house Ingmar Bergman lived in and one by the castle where a mass grave of Swedes killed in a conflict with the Danes had been uncovered in recent history.  We walked up to the castle and then down to the botanical garden.  Camille was tired, so we cut that short but did find a really cool kids’ playground that looked like an old Swedish village.  On the way back we stopped at a fast food hamburger place called Max where Camille got a veggie burger, fries and a shake.  Camille’s earphones were broken, so I went downstairs and worked on my files and let her listen to music before going up to bed.

Friday June 27 Uppsala – Newark –Decatur
I got up at 5:15 and showered, and Camille got up and around really quickly and we were able to grab coffee and tea and rush the half mile to the bus and got the 6:03.  We got through all the security quickly and ate the food I had brought with us from the hotel breakfast.  We bought coffee and tea.  We had to go through a second long line just to get into the boarding area but no problems. I watched the Grand Budapest Hotel on the flight.  Lunch was chicken and rice glop and snack was a grilled Panini.  In Newark we had to ride a bus to the last flight because their train is still broken.  No TSA pre (and I didn’t use Global entry because of Camille) so long line there as well.  I got us fruit and veggies in a coffee shop.  The terminal was old and run down with few services. We got Marta and were at Gwyneth’s in good order. She and Phil met us outside the Artisan.  We had Greek salad and pizza for dinner and watched our pictures on their big TV.

Posted by Barbara Boucher Owens at 9:09 AM