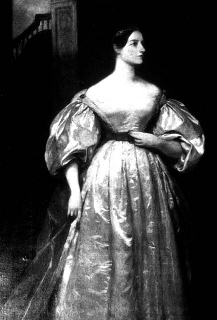 A movement to promote female role models in technology is underfoot and you can help. But first some background, most of which I gleaned from Betty Toole's marvelous biography, Ada, The Enchantress of Numbers, Prophet of the Computer Age.

Most women in computing have probably heard Augusta Ada Lovelace, (or Ada Byron King, Countess of Lovelace) referred to as the world's first programmer. The more I learn about Ada's remarkable life the more I am impressed by her intellectual acumen. Augusta Ada was born 10 December1815, the only legitimate child of the poet Lord Byron and his wife, Anne Isabella (Annabella) Milbanke, Lady Byron. Ada's mother left Lord Byron in January of 1816 and received full custody of Ada as she was thereafter known. Ada never had a significant relationship with her famous father, but when Ada Lovelace died at age 36 she was buried next to him at her own request.

Lady Byron insisted that 5-year old Ada be tutored from dawn to dusk, hoping her daughter would be a mathematician or scientist, not a poet like her father. At age thirteen Ada suffered from measles and was confined to bed for three years, but her mother insisted that her rigorous mathematical education continue. Her mother made sure that Ada met the major inventors and scientists of the day. At age 17 she and her mother met with Charles Babbage. Both Ada and her mother were enthralled by his plans for the Difference Engine, a mechanical calculating machine, dubbed a “Thinking Machine” by Annabella.. She began then a lifelong correspondence with Babbage. She at that time began her correspondence with Mary Somerville, an influential mathematician and astronomer of the time. With her she discussed her ideas about Babbage's work as well. Through her lifetime she corresponded with other luminaries such as Michael Faraday and Augustus de Morgan.

In 1835 she married William, Lord King who in 1838 became the Earl of Lovelace and she the Countess of Lovelace. In 1839 the young countess had given birth to three children, Byron, Annabella and Ralph. She like many women of the aristocracy, maintained three homes, supervised many servants and found it difficult to pursue her many intellectual interests.

Her mathematical studies progressed and she offered to aid Babbage. In 1843 Babbage had given a series of lectures on his Analytical Engine in Turin, Italy. An Italian engineer wrote an article summarizing the technical aspects of the Analytical Engine. Ada translated the article and added notes of her own. Babbage was impressed with these notes in which she put the Analytical Engine into a broader context. She viewed the potential of the machine as a general purpose device that could move beyond the processing of numbers into the processing of any information that could be represented symbolically. It was Babbage who gave Ada the sobriquet “Enchantress of Numbers”

Ada Lovelace died in 1851 following a common medical treatment, bloodletting, which was performed in an attempt to cure the cancer from which she was suffering. One of her last non-family visitors was Charles Dickens! Ada referred to her quest for knowledge as “Poetical Science” and her life is a beacon for us all.

The programing language Ada was named for her, and its 1995 reference manual is titled 1815, the year of her birth.

There are lots of intriguing sources about her life, ideas and family available. In addition to Tolle's biography, you might enjoy Woolley's The Bride of Science: Romance, Reason, and Byron's Daughter. I strongly recommend the biographic film To Dream Tomorrow. I haven't seen Conceiving Ada but seems like an interesting fictional piece. I enjoyed, Haunted Summer, a film about the travels of Lord Byron with Percy and Mary Shelley after separating from Annabella and Ada. The lovely little book, Scientists Anonymous by Patricia Fara has a short biography of Ada Lovelace, suitable for younger readers. Fara also contributed to a biographical piece on Ada broadcast on BBC.

If you're a blogger and happy to write/video/podcast about one of your female technology heroes on 24th March 2009, please do join us in supporting the following fantastic initiative from Suw Charman-Anderson and sign-up to the Ada Lovelace Day Pledge:

I will publish a blog post on Tuesday 24th March about a woman in technology whom I admire but only if 1,000 other people will do the same. — Suw Charman-Anders

This entry will be reposted on the ACM-W blog with my permission.

Posted by Barbara Boucher Owens at 8:28 AM No comments:

Back at the Cabin

After attending the inauguration(without tickets) and heading up to Massachusetts to visit Phil's sister, we returned today through a snowstorm in Tennessee. Since Gwyneth wouldn't believe we were in snow, I took this video at the cabin -- not as heavy as on I-75, but snow, nonetheless.

Since it sounds like rain -- here is a photo where it is sticking! 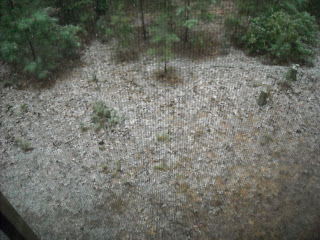 Posted by Barbara Boucher Owens at 11:58 AM No comments: